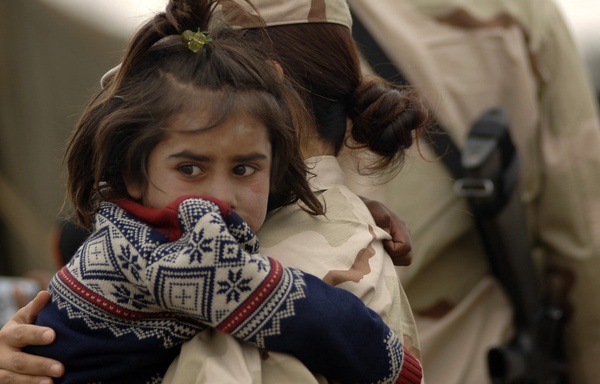 Europe is in big trouble and several countries are headed for even bigger trouble in the years that lie directly before us.

Europe is facing an immediate explosion of refugees into a number of settings that will all be stressed by that change in their populations. That explosion of refugees will create problems at basic instinct influenced levels for both the refugees and the people who live in the places where they will seek refuge.

People everywhere are being heavily influenced by their basic packages of instincts. Europeans, like all other people on the planet, are guided in their daily lives and in their thought processes by basic sets of instincts.

We have instincts to be territorial, hierarchical, parental, and tribal ... And those instincts affect how we think and what we do in every setting we are in.

We have particularly strong instincts to divide the world into Us and Them and to treat people very differently based on whether we perceive people to be an us or a them. Those instincts have created major portions of our history in every setting. The behaviors that are created by those instincts are consistent and painfully easy to see.

People tend to distrust and oppose whoever is perceived to be them in any setting where those instincts have been activated.

In worst cases, we actually enslave them. In too many cases, we ethnically cleanse them and we expel them from our territory. Genocide happens against them. Deep prejudice and intentional discrimination is directed against them.

We do damaging things to them with no sense of guilt or remorse.

We actually tend to suspend conscience when someone is perceived to be them.

That set of issues and behaviors is extremely relevant to Europe today because the formerly tribally and ethnically pure nations of Europe have been turned into countries with significant levels of internal intergroup stress and internal conflict by the last couple of decades of high volumes of immigration into Europe by people from multiple other ethnic groups and tribes. There are high levels of intergroup stress in a number of countries today and that situation is being exacerbated to the breaking point by additional groups of refugees who are now fleeing from their homelands into the European settings.

That explosion of refugee immigrants into those countries will push the intergroup instinct activation levels in negative ways to the point where significant intergroup explosions are absolutely guaranteed to happen in many settings.

Europe has not dealt very effectively with the last two decades of immigration.

The book Cusp of Chaos explains that situation and identifies ways that those countries are finding themselves increasingly at war with themselves. Major portions of European cities are now enclaves for people speaking different languages, sharing different cultures, and tied to a different set of allegiances and values than the indigenous ethnic groups in each of those settings.

The anger levels have been building to the point where several cities have had intergroup demonstrations that expanded in some settings to be actual riots. Paris had more than 10,000 cars burning in the riots that took place there a couple of years ago. Paris also just had a horrible massacre of the staff of a news magazine that was done by people who were immigrants to that setting. The us/them instincts that were activated in the minds of the shooters at the Paris magazine caused them to celebrate the killings they did and to feel no guilt at any level for firing those guns.

When people have those instincts activated, then shootings, bombings, and other levels of damage feel very right to the people doing the damage.  The loyalty levels for the people doing the damage are clearly to their own group and not to the new nation where those immigrants now live. The local people living in those settings are perceived by that set of immigrants to be a Them.

There are now thousands of people living in various European countries who have been trained to do damage and who have the personal motivation levels to make damage happen. That obviously creates significant risk of terrorist types of attacks in European settings. Right now, in the Middle Eastern countries where those sets of intergroup instincts are in full gear, there has been more than one suicide bombing per week for several years. The people supporting the suicide bombers by wrapping them in bombs are clearly not running short of people who hate other people so much that they are willing to lose their own lives to damage them.

Non-assimilating immigrants are taking over major portions of many European cities. The leaders of those countries are having a very hard time trying to figure out how to manage that situation in ways that will create long-term intergroup peace in those settings. Instead of building strategy, the leaders in those settings are treating the issues as being both political and ideological. The leaders of those countries are committed to a very progressive and enlightened set of ideological beliefs about inclusion that call for acceptance of immigration and encourage assimilation of the new immigrants into the cultures, belief systems, loyalty commitments, and political processes of each country.

That enlightened ideological approach is doomed to fail in a high number of settings — overwhelmed by the pure biological realities of instinctive intergroup behaviors that will dominate thought processes, emotions, and behaviors in each of those settings.

People are people everywhere. When people in those settings from the original French, Italian, Dutch, and German indigenous groups find themselves surrounded and replaced in communities by "them" who are choosing for their own tribal, ideological, religious, and instinctive reasons to function as "them" in each of those settings, then the original groups will all have their us/them instincts fully activated.

The future for those instinctively divided settings will be divisive, sometimes destructive, often conflicted, and often painful for people from each of the relevant groups.  It is a bad thing in most settings to have a them in the setting, and many of the groups in the European settings are choosing a pathway of being perpetually them.

That is a reality that the leaders of those settings need to face It won't go away as a reality on its own momentum. Wishful thinking will not make that reality disappear. Politically correct words and well-intentioned positive thoughts will not make those underlying instinct-triggered intergroup behavior patterns disappear.

Those sets of intergroup instincts will continue to guide behaviors in all of those settings until people come to the realization that the negative and damaging behaviors that feel so right only feel right because they have an instinct at their core.

The people who are in so much trouble in Europe with intergroup issues today do not know that their basic intergroup instincts are activated and they clearly do not know that those instincts are destined to lead them into even more trouble in the future as the cultural, tribal, and ethnic diversity of Europe explodes beyond any ones wildest estimates of how diverse and how multi ethnic major parts of Europe are destined to be.

When millions of refugees enter those countries and end up becoming permanent residents, they will continue behaviors that will trigger wide ranges of inter group instincts and reactions. If people aren't aware that they have instincts shaping their thinking, there will be multiple settings with people angry at other people and groups of people unhappy with other groups of people.

A flood of refugees will change every setting they end up living in. Both the refugees and the local people will evolve from initial acceptance to ultimate stress and strain at multiple levels. So the short-term feelings of good will will evolve into longer feelings of intergroup conflict and stress.

The Cusp of Chaos and The Art of InterGroup Peace both describe and explain what that future is likely to be.